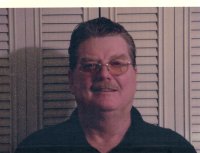 PALONIS, ANDREW H., 61, Sebring, FL died August 12, 1013. Andy was born in St. Petersburg, FL, a graduate of Proviso East, Maywood, IL. He excelled as a left handed pitcher and was an all star player. The White Sox scouts sought him out, however he had joined the U.S. Army serving during the Vietnam Conflict. Andy retired from Amerikan as a machinist. He was preceded in death by his former wife, Victoria and is survived by his parents, Evelyn and Mark Hufstetler; sister Debra Palonis and her fiancée, Bill Funk all of Sebring; daughters, Andrea Palonis, CA and Cara Valdez, IN; granddaughter, Alicia Valdez; several nieces and nephews. Visitation 1-2 pm, Monday with a service to follow at 2:00 pm at Morris Funeral Chapel. Military Honors will follow at Lakeview Memorial Gardens.

Visitation 1-2 pm, Monday
with a service to follow at
2:00 pm at Morris Funeral Chapel.
Military Honors will follow at
Lakeview Memorial Gardens.

To order memorial trees or send flowers to the family in memory of Andrew H. Palonis, please visit our flower store.