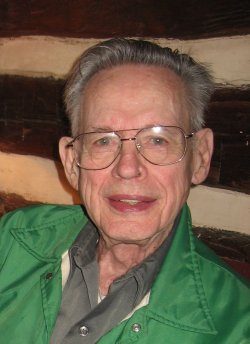 Bruce Thomas Hall, a retired pastor, missionary and engineer, died Saturday, November 6, 2010, in Sebring, FL. He was 88.
Mr. Hall, son of a railroad engineer (Wilburn Pierce Hall) and a homemaker (Jessie Erma Bond), was born on May 12, 1922, Baltimore, MD. In February 1940, he graduated with a High School Diploma from the Baltimore Polytechnic Institute. Trained as a lineman and installer, he then worked for the Baltimore Chesapeake and Potomac Phone Company.
In September of 1942, Bruce was drafted into the Army 's Second Division. After arriving in Belfast, Ireland, in October 1943, he received the rank of Sergeant. He was also an Army Ranger. He was sent to Wales and then to Normandy, landing on Omaha Beach June 7, 1944 (D Day plus 1) for the Normandy Invasion. When the War ended, he returned to Baltimore, discharged on September 28, 1945, as Technical Fourth Grade Sergeant, Headquarters Company, Ninth Infantry Regiment.
Battles and Campaigns
Normandy
North France
Rhineland
Central Europe
Ardennes
Decorations and Citations
Bronze Star Medal (Bravery)
Good Conduct Medal
EAME Theater Service Medal
Liberation de la France Medal


On October 1, 1945, he entered Virginia Polytechnic Institute and Farm School (now Virginia Tech) under the GI Bill, completing the four-year program in three years, and graduating with honors with an Electrical Engineering Degree (BSEE) on September 9, 1948.
In the fall of 1949, he attended Prairie Bible Institute, Three Hills, Alberta, and took the four-year course in three years, graduating April 8, 1952, with a theology certificate - Bible and Missionary Training. He then applied to the Sudan Interior Mission (SIM) for missions.
He returned to Baltimore, MD, in 1952 and received his ordination from The Community Evangelical Church of North Baltimore on Sunday, June 14, 1953. He sailed the summer of 1952 to Aden, Arabia, and then flew to Addis Ababa, Ethiopia.
Bruce met Agnes Elizabeth Houston ("Aggie") in Addis some months after arriving; they fell in love and were married January 14, 1953. Rhoda Elizabeth was born March 20, 1956; Barbara Lee was born April 17, 1957. His work in Ethiopia included preaching and teaching in remote areas as well as establishing a Bible school. He built houses and church buildings, schools and clinics. He assisted Agnes in providing healthcare. They returned to the United States in 1969, settling in Towson, MD.
Bruce took a position with the Baltimore Gas and Electric Company, working as an electrical engineer. He retired in 1986. Hobbies included camping, woodworking and photography. He regularly attended church services and served in Sunday school as well as men's ministries. He was actively involved in the Second Indianhead Division Association and served as Chaplain. He enjoyed visiting his children and grandchildren as well as annual family vacations at Lost River State Park.
After Agnes suffered a severe brainstem stroke in September 2007, he cared compassionately for her at home with the assistance of two wonderful nurses until her home going on October 18, 2008. From October 2008 until October 2009, the Tillman family enjoyed regular weekend visits from Bruce to their Rockville home. Otherwise he maintained a very independent life in Towson. He visited the Wolfe family in October 2009 in Sebring, FL, and immediately upon his arrival was diagnosed with acute kidney failure. He fought diligently through several hospitalizations and rehabilitations as well as regular dialysis sessions and was able to enjoy family life with the Wolfes as he lived with them for periods of time as able. He touched countless lives in this process, and he leaves an amazing legacy of selfless and diligent service. He will be greatly missed, but there is no doubt that he is now whole and healthy again, worshiping his Lord and Savior, and for that we can rejoice.
Two daughters, Rhoda Wolfe and her husband, Arthur, of Sebring, FL, Barbara Tillman and her husband, I.C., of Rockville, MD; a brother, Jack Hall of Ellicott City, MD; 7 grandchildren and 4 great-grandchildren, survive Bruce.

To order memorial trees or send flowers to the family in memory of Bruce Hall, please visit our flower store.