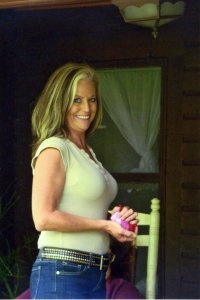 HANKEN, CAROLINE SKIPPER, 54 of Sebring, FL died April 10, 2012. Caroline was born in Avon Park, FL and is the daughter of the late, Robert D. Skipper and Mae Gribbens Hogin. A graduate of Sebring High School, Class of 1976. She had worked for Barnett Bank and Highlands County Tag Agency and was a Sales Representative for Lincare and Rotech. She is survived by her sister, Leta (Paul) Matthews, Ft. Meade, Fl; brothers, Kelvin Skipper and Wendell (Jana Sharp) Skipper all of Sebring; nieces and nephews, Stephanie Skipper, Kelvin D. Skipper, Angela (Sydney) Ivey and Robert Wayne Matthews; companion, Rick Hanken and his children, Jason and Cindy Hanken and best friends, Peggy and Jug O'Bannon. A Celebration of her life will be held, Friday, April 20th at 6:00PM at Morris Funeral Chapel. The family requests donations to Humane Society of Highlands County.

A Celebration of her life
will be held, Friday, April 20th
at 6:00PM at Morris Funeral Chapel.

To order memorial trees or send flowers to the family in memory of Caroline Skipper Hanken, please visit our flower store.