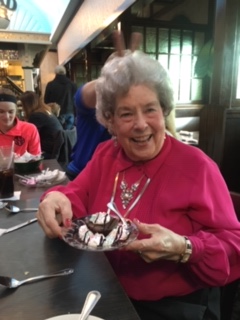 Hamilton—Carolyn, age 87, from Augusta, Illinois passed away Monday, January 14, 2019 in The Manor at Lake Jackson, Sebring, Florida. She was born January 29, 1931 in Shelbina, Missouri to Viola and Bernard Decker, where she enjoyed growing up on the farm with her younger brother, Bob Decker, who survives.

As a young girl she competed in many “acrobat” competitions in state and local fairs. She graduated from Shelbina High School and moved to Quincy, IL where she attended Gem City College. Carolyn pursued a career as an airline reservationist working for both United and Ozark Airlines in Chicago, Illinois.

Carolyn’s love of music and art became her true passion in which she shared with so many people. She was an avid self-taught painter and is well known for her design and artwork on the mural in the Augusta Pitney Park in 1980 and again in black and white in 2000. Later in life she helped found and organize the Western Illinois Tole Society (WITS) in which she and local artists would gather, share and learn tole painting techniques. She was very well known for her love of oil paintings depicting farm sceneries from both rural home life in Missouri and Illinois.

Music was a natural talent for Carolyn and she had a true gift of playing by ear. Carolyn enjoyed sharing her music with anyone that would listen and was well known for playing the piano at weekly church services, weddings, funerals and various state and local events. She also shared her music with many local nursing homes by playing both the piano and accordion daily in multiple locations. On the weekends she enjoyed attending jazz festivals with her late husband, Robert Hamilton, and friends.

Carolyn was an active member of many local organizations, some of which included Illinois Tole Painters Society, Illinois Federation of Republican Women, PEO Chapter AQ, the Rebekah’s Lodge, Eastern Star, and the Methodist church. She was a longtime member of the Tri County Country Club where she enjoyed years of fellowship on Tuesday Ladies League in pursuit of perfecting her drive. She was also well known for her love of “tatting,” in which she tatted and gifted thousands of bookmarks and snowflake ornaments, logging each recipients name in her book.

She is survived by her three children, Alan Holmes (Nancy) of Sebring, FL., Ray Holmes (Janice) of Clayton, IL., and Jill Steiger (Raymond) of St. Louis, MO.; Seven grandchildren, Alana Murphy (Sean) of Houston, TX., Ross Holmes of Tampa, FL., Nicole Huppe (Kyle) and Jacquelyn Haschemeyer of Arenzville, IL., and Grant, Brock and Sadie Steiger of St. Louis, MO.; Seven great grandchildren; and one brother, Bob Decker (Kate) of Shelbina, MO., In addition to her parents and husband of 40 years, Robert Hamilton of Augusta, she is preceded in death by her daughter Jan Holmes of Augusta, IL.

To order memorial trees or send flowers to the family in memory of Carolyn Hamilton, please visit our flower store.
Send a Sympathy Card