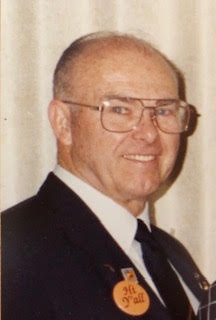 GRIFFING, DONALD A, Lt.. Col. USAF (Retired), and Vietnam Veteran; died peacefully at home on Thursday, May 2nd with his family at his side, he was 90 years old and 10 days. He was born on April 23, 1929 in Council Grove, KS; graduated from Annapolis Naval Academy Class of 1952; married the love of his life, Jody, after graduation; transferred to the United States Air Force so that he could fly. Served as a fighter pilot most of his career in the Air Force and said the highlight of his career was as Flight Commander in the 559th Tactical Fighter Squadron Cam Ranh Bay, Vietnam, where he flew 285 combat missions in the F4C Phantom jet. He said his most enjoyable nonflying military assignment was six years as commander of the 56th Combat Support Squadron, Avon Park Air Force Bombing Range from where he retired in 1978. For his meritorious service in the Military, he received medals for the Distinguished Flying Cross, Air Force Meritorius Service medal, Air Medal with 3 Oak Leaves, Air Force Commendation, Combat Readiness, AF Good Conduct, Navy Good Conduct, National Defense with 1 Star, Vietnam Service, Vietnam Gallantry with Palm, Republic of Vietnam Campaign. Don joined the Rotary Club of Avon Park in 1975 while still in the Air Force. Served as Club President in 1983-84 and was named as Rotarian of the year in 1993 and served as District Governor in 1993-94; District Secretary 1995-2005; District Communications Officer in 2006. Don also served as Director and on the Board and Staff of Rotary's Youth Leadership Seminar called “Seminar for Tomorrow's Leaders” (S4TL) for 32 years and loved it! He was also very active in the First United Methodist Church of Sebring since 1978 serving multiple times as chair of the church and it's committees, always ready to help whenever he was needed! Don is survived by his beloved wife of 67 years, Jody; daughter, Kathleen Griffing Moore and husband, Bill; son Mike Griffing; brother Bill Griffing of Rose Hill, KS and niece's Cindy and Ginger and families; grandchildren: David, Melissa, Michelle, Derrick and Jessica and 6 great-grandchildren; extended family grandchildren, Jennifer, Dan, Michael and Sam and six more great grandchildren loved equally. Don was preceded in death by his eldest son, Donnie, February 2019. To all who knew him, He served his country with pride, When people came up to him to thank him for his service he would smile and reply “No need to thank me, I loved every minute of it and I'd gladly do it again!” He gave his all, To his Country, His Family, His Friends and His Church. At 11:00 am, Saturday, May 18th, all with gather in the church courtyard of First United Methodist Church, 126 S. Pine Street, Sebring for a fly over by the Air Force, followed by Military Honors, by MacDill Air Force Base, Tampa. The funeral service will follow inside the church with refreshments to follow in the church fellowship hall. Burial will be May 20th at Sarasota National Cemetery, Sarasota, FL at 1:30 pm. The family suggests memorial gifts to Gary Sinise Foundation, http://garysinisefoundation.org or Semper Fi Fund, http://semperfifund.org. Both charities provide urgently needed resources and support for combat wounded veterans, member of the US Armed Forces and their families. Arrangements handled by Morris Funeral Chapel, Sebring, FL. www.morrisfuneralchapel.com

To order memorial trees or send flowers to the family in memory of Donald Alford Griffing, please visit our flower store.
Send a Sympathy Card