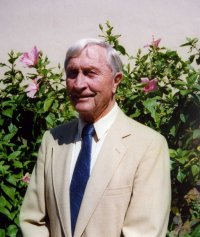 SPIEGEL, DR. OTTO ARNOLD, 87 of Sebring, FL, died November 1, 2011. Known here in Sebring as Dr. O.A., was born to Otto and Stella Speigel in Indiana on February 4th of 1924 and moved shortly after to Wisconsin where he grew up. He joined the Navy in 1941 and was a radio operator at a secret military radio station overlooking Pearl Harbor during W. W. II. He married his love Gloa Martha Bleeke and celebrated 65 years of marriage. He was preceded in death by his daughter Janalee Kay Spiegel, and his grandson Seth Samuel Spiegel. He is survived by his loving wife, his sons, Dr. David Arnold Spiegel, Dr. James Ronald Spiegel, Mr. Jon Kevin Spiegel, all of Sebring, Florida, and his daughters-in-laws, Dr. Susan Spiegel, Mrs. Penny Spiegel, Mrs. Judy Spiegel all of Sebring, Florida. His grandchildren are Mrs. Juliet Siver, her husband Mr. Richard Siver, Mr. Jonathan Spiegel, his wife Mrs. Christie Spiegel, Mrs. Shelley Glisson, her husband Mr. Brian Glisson, Mr. Sean Spiegel, and Mr. Shaanan Spiegel and his adopted grandchildren are Miss Michelle Spiegel, Mrs. Samantha Welch and their brother Mr. Zebadiah "Cody" Spiegel. He has 13 great grandchildren, all here in the Sebring area. He was an Elder and a member of Faith Luthern Church in Sebring. He was well known for his free sports physicals for the students of Highlands, Hardee and Okeechobee Counties for years. While in the Navy he attained the G I bill. Dr. O.A. Spiegel attended and graduated in May of 1949 from the Lincoln Chiropractic College and graduated in August of 1950 from O'Neil College of Chiropractic, and received a diploma from Central States College of Physiatrics in April 1952. Dr. O.A. Practiced in Decatur, Indiana until moving to Port Charlotte, Florida in 1973, moved to Sebring, Florida in November of 1976 where he practiced with his son Dr. James R. Spiegel until he retired after over 56 years of doing what he loved best, helping people. Dr. O.A. Was a past board member of the Airport Authority. He went to many meetings and wrote many articles trying to establish water conservation here in Florida that was a passion of his. He was an avid salt water and fresh water fisherman all of his life. He loved to tell stories of his years in the Navy and his fishing catches and about anything else that came to mind. He enjoyed helping his son Jon Spiegel, who does Hypnosis here in Sebring, and is responsible for the downtown circle Christmas display of lights. Family will be receiving friends on Sunday 1-2 PM with the Funeral Service to follow at 2:00 PM at the Morris Funeral Chapel. Family request memorials to Faith Lutheran Church, 2740 Lakeview Dr., Sebring, FL 33870.

Date Of Birth: February 4, 1924
Place of Birth: Indiana
Death: November 30, 2011
Place of Death: Sebring, FL
Veteran of the U.S. Navy
He was an Elder and a member of
Faith Luthern Church in Sebring

To order memorial trees or send flowers to the family in memory of DR. Otto Arnold Spiegel, please visit our flower store.
Send a Sympathy Card