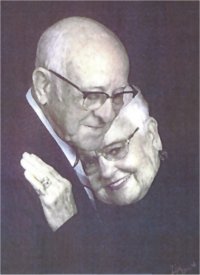 PINSON, EDNA C, 96 of Orlando, died, October 21, 2016 at her residence. She was widow of the late Rev. Woodrow M. Pinson, who had served several churches in the greater Orlando area. Edna is survived by her daughters and their husbands, Nancy and Larry Strasser, Anne and Chuck Wyre and a grandson, Eddie Danielson and great grandson, Eddie Danielson, Jr. and step grandson Justin Wyre. Visitation, 12 noon with a Funeral Service 1:00 pm, Saturday, October 29th at Conway Baptist Church, 4000 S. Conway Road. Family burial at Woodlawn Memorial Park. Memorials are requested to Vitas Hospice.

Emmie Edna Pinson was born on September 9, 1920 in Johnston, South Carolina to Richard and Emmie Crim. Her father owned a farm of 200-300 acres where he raised cattle and grew cotton as a business. The family also included three (3) sisters Katherine, Chloe and Dot. Edna was the second child born in the family.
After graduating from high school, Edna attended North Greenville Junior College in Greenville, South Carolina where she met her husband, Woodrow Manning (uWoody") Pinson and they married July 21, 1940. At Woody's death, they were married almost 69 wonderful years.
After North Greenville Junior college,Woody and Edna moved to Furman University, also located in Greenville, SC. While at Furman, their daughter Nancy was born. Upon Woody graduating from Furman, they moved to Louisville, KY where Woody attended and graduated from the Southern Baptist Seminary. While in the seminary, Woody and Edna ministered together at Youngers Creek Baptist Church in Elizabethtown, Kentucky. Upon Woody's graduation from the seminary, they accepted a call to the First Baptist Church in Inverness, Florida where they lived for about three (3) years and while in Inverness their second daughter, Anne was born.
After leaving Inverness, they accepted a call to Park Lane Baptist Church in Knoxville, Tennessee where they lived for approximately six(6) years. From Knoxville they accepted a call to the First Baptist Church in Travelers Rest, South Carolina. After nine (9) years in Travelers Rest, God called them to the Home Mission field and they moved to Wheeling, Illinois where they started churches in the Chicago area. While they were in Illinois,Edna was employed in various jobs to help supplement Woody's salary. They remained with the Home Mission Board for about six (6) years. After a successful ministry in Illinois, they moved back to Florida in 1967 to a climate more suitable to them and remained in the Orlando area for the rest of their lives.
Edna's ministry consisted of working in the various churches where they were living as choir director, pianist, sang in the choirs, officer of the WMU Southern Baptist Association and Sunday school teacher. Her hobbies were painting, weaving, sewing, cooking, entertaining, reading and at about the age of 80 learned how to operate a computer. She was also active with the Orange County Adult Literacy Program where she taught reading and writing to adults.
About one (1) year after Woody's passing, Edna moved in with her daughter Anne and her husband Chuck where she lived for about two (2) years and then moved into Westchester of Winter Park Assisted Living where she lived the remainder of her life.
Edna is survived by her daughter Nancy and her husband Larry, her daughter Anne and her husband Chuck, her grandson Eddie Danielson and great-grandson Eddie Danielson Jr.


Condolences or Life Stories may be expressed in her Guestbook. Morris Funeral Chapel, Sebring, Fl.

To order memorial trees or send flowers to the family in memory of Edna C. Pinson, please visit our flower store.