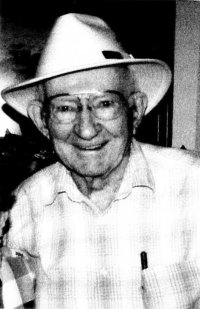 In Memory Of The Firework's Man

Edward Kolisek, 91, of Sebring, Florida, known by many as "The Fireworks Man" or "The man with the white hat", died peaceably January 30, 2012 under the compassionate care of Good Shepherd Hospice. He is survived by his daughter and son-in-law of Sebring and his Grandson Flyte and Granddaughter Florence of Alaska. Through his company, Pyro Display in Sebring, he specialized for over 50 years, the design, manufacture and exhibition of pyrotechnics.
Edward was born in Elizabeth, NJ on February 4, 1920. At an early age he was fascinated with explosives. By age 12 he was making and documenting chemical compositions. His first job at age 13 was in a fireworks factory.
During WWII he served his country at Aberdeen Proving Ground as an Ammunitions Analyst for the Foreign Material Branch, and was the first to render inert the German V2 rocket. It was during this time he met his beloved wife he nicknamed, Flossie Frills.
In 1949 they traveled to Florida and settled in Sebring. Side by side Ed and Florence manufactured fireworks as well as putting on the shows.
Some of his cherished memories and accomplishments include: His meteors in the Statue of Liberty celebration. Contribution of his fireworks and special effects for the Tupperware convention jubilees and Disney World.
Providing Grucci Fireworks company with his specialty ring shells and meteors in the 1979 International Pyrotechnic competition in Monte Carlo. He watched with pride as USA won the 1st place prize.
Many still remember the spectacular effect of golden flares surrounding the 10 mile shoreline of Lake Jackson during Sebring's 50 year gala. In his later years he had a dream to open a fireworks museum and to set up a blasting business in Alaska to mine gold.
It was Dad's hope that you enjoyed watching his fireworks as much as he enjoyed making them.


To order memorial trees or send flowers to the family in memory of Edward Kolisek, please visit our flower store.
Send a Sympathy Card