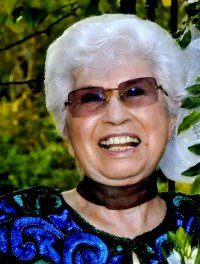 NORMANDIN, FLORENCE, 92 of Sebring, FL died January 15, 2016. She was born in Detroit, Michigan. Flo retired from Chrysler Corporation as an Executive Secretary moving to Sebring in 1992 from Lake Orion, MI. Flo was involved in numerous card groups, Spring Lake Golf, Womens League, monthly birthday bunch in Spring Lake. She was a founding member of the Red Hats in Spring Lake, and enjoyed poker. She was preceded in death by her step-daughters, Charlene Haley and Judy Lutz. She is survived by her loving husband, Renald (Ray) Normandin, Sebring; son, Anthony (T) Felice of MI and step-daughter, Cheryl (David) Roman, Holland, MI; grandchildren, Noah and Nicholas; step-grandchildren, Aaron, Emily, Alex, Christopher and Michael and numerous great grandchildren. Service will be held at a later date.

Service will be held at a later date

To order memorial trees or send flowers to the family in memory of Florence Normandin, please visit our flower store.
Send a Sympathy Card