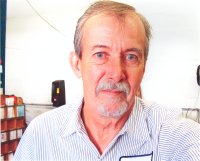 HENDRIX, GENE A. 71 of Sebring passed away Wendesday, December 28, 2011 at Good Shepherd Hospice. He was born in Bryson City, North Carolina moving to Sebring in 1972. He was the owner of Gene's Alignment and Brake Service. He was a veteran of the United States Army. He enjoyed golf and fishing. He is survived by his wife, Evelyn; Sons Gene A. Hendrix, Jr., Vaughn Hendrix of Sebring, Walt Hendrix of Orlando, FL and Jeff Hendrix of Cody, Wyoming, Daughters Melanie Hendrix-Johnson of Sebring and Michele Stevens of Bonifay, FL, thirteen grandchildren and one great grandchild. Memorial service, Saturday, at 2:00pm, Jan. 14, 2012 at Morris Funeral Chapel. Those desiring may make contributions to Good Shepherd Hospice.

To order memorial trees or send flowers to the family in memory of Gene A. Hendrix, please visit our flower store.