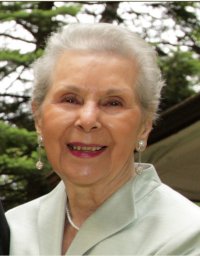 Grace Gioe Sagona, Sebring, Florida November 12, 1920 - September 3, 2012 Born Grace Catharine Gioe to parents Joseph Gioe and Veronica Malone Gioe in Brooklyn, NY. From the very start of her life, it was obvious to everyone who came in contact with Grace that she possessed a outgoing personality and extraordinary enthusiasm for life. Grace brought humor, love of laughter and a giving heart to everything she did, especially to her extensive volunteer work in the Sebring community.
She attended Brooklyn public schools and Marymount College in Tarrytown, NY. She spent every summer at Our Lady of Lourdes Camp for girls in Livingston, NY. The childhood friendships that she made at camp and later in college were deep and meaningful for her entire life.
She began her career as a guide for the Dumont Radio Studios, NYC, and was selected to be the host of the first children's show ever broadcast on the Dumont Network in 1946. Her show, Aunt Gracie's Birthday Party made her the pioneer women in television broadcasting.
She left her career in early television for marriage and to raise a family in 1949 and then moved to North Miami, Florida in 1953. She raised six children, 3 from her first marriage and 3 from her second marriage to Stuart Hadley Sagona in 1961. Grace and Stuart moved from North Miami to Sebring in 1980.
Grace's enthusiasm and her deep compassion led her to teach Special Education in Dade County and Highlands County, Florida. Once she retired, she was able to pursue her love of acting at The Highlands Little Theatre in Sebring. She was associated with over 48 plays and featured as the lead or supporting actress in many. Not only did Highlands Little Theatre benefit from her acting talent but she was a tireless volunteer in many capacities. In 1997 the board members of the theatre created an annual award called The Gracie Award which was first given to her and then other volunteers who also exhibited Grace Sagona's extraordinary level of contribution to the Highlands Little Theatre in Sebring, Florida.
Never tiring of challenges and opportunities to give back to her community and the opportunity to have fun, Grace trained as a clown in 1992 at the Ringling Brother's School for Clowns. She became GiGi the Clown and used her new character to entertain at local nursing homes, children's hospitals and libraries across Highlands and Polk counties.
In 2000, Grace and Stuart moved into Fairway Pines Senior Living Community. She expressed her constant desire to make everyone's day happier by making sure she had a daily joke for everyone she saw and volunteering tirelessly at the facility. In addition, she was a devoted volunteer at Florida Hospital with over 10,000 hours of volunteer work to her credit. She also volunteered as a docent at the South Florida Community College art gallery and as a docent at the Highlands Hammock Park.
Proceeding her in death was her husband, Stuart H. Sagona in 2005. Surviving and missing her are her children Joseph Bradford Sagona of New City, NY; William Joseph Sagona of Tallahassee, FL; Elizabeth Sagona Wonnacott of Santa Rosa, CA; Phillip Sagona of Greenville, NC; Carol Sue Sagona and Lee Ann Chambers of Yelm, WA. She is survived by eight grandchildren and one great grandchild. Donations in memoriam to Disabled American Veterans, www.dav.org.

To order memorial trees or send flowers to the family in memory of Grace Gioe Sagona, please visit our flower store.
Send a Sympathy Card