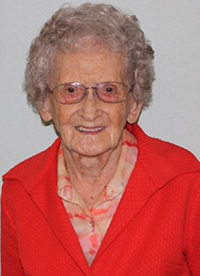 Hallie Wenner Long Kennedy was born September 16, 1910, daughter of Clara E. Morehead and John Chapman Wenner. They lived in the North East corner of Perry Township, Ohio at that time.
After her mother's death in 1912, Hallie lived with an Uncle and Aunt, Ed and Eva Wenner who lived their entire life in Perry Township. Hallie was blessed with their kindness and influence and remained close to them until their deaths.
Hallie joined the United Brethren Church in Perrysville at an early age and has always been active in any church which she was a member. After graduating from Perrysville High School, she attended Mount Union College and graduated from Wilcox College of Commerce in Cleveland, Ohio, taking advanced math and commercial law. She spent some time at Otterbein College in Westerville, OH taking preferred courses while working at the college. Hallie was employed at Babcock and Wilcox Research Center in Alliance, OH as a Statistician, retiring in 1975 after 25 years with the company. Hallie married George Long February 6, 1937, who lost his life in an auto accident in 1943. Hallie married David Kennedy in 1953 and he died in 1978 after a short illness.
Hallie was extremely active in Perry Township Grange and was Master at one time. She was also a member of the Eastern Star. She and Dave Kennedy were Matron and Patron in 1964. Hallie was also Deputy Grand Matron of District 13 in 1971.
After retirement she spent 20 winters in Florida and moved there permanently in 1996. Hallie taught 55-Alive Driving for AARP for 12 years in Ohio and Florida. She has worked with "Guardian Ad Litem" since moving to Sebring, FL in 1996. In her retirement, Hallie was an avid gardener and she worked in her greenhouse at The Palms of Sebring Retirement Community.
Hallie has traveled abroad, reaching most foreign countries since retiring. She spent a month in Russia with the Peace Corps in 1986 at the time Reagan and Gorbachev had their first Peace Conference. Special mention, Reagan's statement "THIS WALL MUST GO."
Hallie is a life member of the Carroll County Historical Society in Ohio.
In lieu of flowers, contributions may be made in memory to Perrysville United Methodist Church c/o Paul Logan, Treasurer, 17 Amsterdam Road SW, Scio, OH 43988.
Sweeney Dodds Funeral Home in Carrollton, OH will handle the arrangements. Burial is in UB Cemetery In Perrysville, OH. Phone 330-627-5505.
There will be a memorial service for Hallie at The Palms of Sebring, 725 South Pine Street, Sebring, FL Tuesday, January 15th at 10 am.

Sweeney Dodds Funeral Home
in Carrollton, OH
will handle the arrangements.
Burial is in UB Cemetery
In Perrysville, OH. Phone 330-627-5505.
There will be a memorial service for
Hallie at The Palms of Sebring,
725 South Pine Street, Sebring, FL
Tuesday, January 15th at 10 am.

To order memorial trees or send flowers to the family in memory of Hallie Wenner Long Kennedy, please visit our flower store.