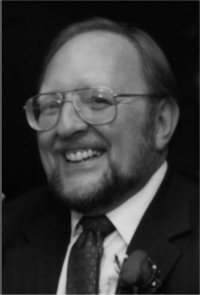 MAYS, HARLEY BERNARD, born in Cleveland, OH on December 7, 1935 as Harley Bernard Zwierzykowski, died peacefully, Sunday evening, Nov 30, 2014 in his motorhome while visiting his daughter, Pat and family. His dog, "Lady" was by his side. His laughter, sense of humor and love for Christmas will be missed by all.
Harley went to school in the Garfield Hgts, OH area, then attending Ohio U, Kent State & Western Electric Univac. His dad, Bernard, died when Harley was 19. He earned his BS from Cleveland State & an MBA in accounting & marketing from Akron U. He worked at Western Electric assembling telephones, began teaching at Willo- wick High in 1964, then was hired as the Twinsburg Finance Director. In 1970 he moved his first wife, Joanne & children, Pat, Mike and Diane to Sebring, FL where he taught Business at So. Fla Junior College in Avon Park (now known as So Fla State College). On the side, he played piano at Kitty and Joes in Lake Placid & piano and organ at the First Christian Church in AP.
Harley held membership & offices in many associations including a past-president & being a Paul Harris Fellow of the Avon Park Noon Rotary. For recreation, he played the piano beautifully and was an avid sports fan (especially cheering for the Cleveland Browns, Indians and Cavaliers). He married Sharon Baer-Lyons in 1990 and upon their retirement, purchased & operated Café Nostalgia, a family-style restaurant in Mars Hill, NC, continuing to play piano & helping as "Santa Claus" wherever he went. After selling their café, they hosted Winnebago Industry Tours, traveling throughout the US and Canada, having stationary homes in Chisago City, MN and Ocala, FL. After Sharon died in 2009, Harley continued traveling with his WIT friends and visiting with his family in Sebring. Harley is preceded in death by his parents, Bernard Zwierzykowski Mays & Margaret Chesla Mays, a sister, Patricia Ann Mays, son, Michael Bernard Mays daughter, Diane Margaret Mays and 2nd wife, Sharon Baer-Lyons. He is survived by his daughter, Pat (Dean), Sebring, FL, stepson, Trev (Tammy), Chisago City, MN, daughter-in-law, Bobbie (John), Sebring, FL, grandchildren, Matthew (Melissa), Tampa, FL, Stephanie (Jared), Louisville, TN, Melissa and Jonathan, Sebring, FL, step-grandson, Jon, Morehead City, NC, mother-in-law, Louise, sister-in-law, Elayne (Tom), Ocala, FL.
The funeral mass will be Saturday, Dec. 6, at 1:00pm, St. Catherine's Catholic Church, 820 Hickory St, Sebring, FL 33870 with a reception to follow immediately after the mass. In lieu of flowers, donations can be made to help find a cure for ovarian and melanoma cancers or donations can be made to a trust fund for his grandchildren's continuing education at Mid-Florida Schools Credit Union, Harley Mays, Sebring, FL, Graveside services will be Monday, Dec 8, 2014 at 12 Noon at Dekle Cemetery in Lake Butler, FL.

The funeral mass will be
Saturday, Dec. 6, at 1:00pm,
St. Catherine's Catholic Church,
820 Hickory St, Sebring, FL 33870
with a reception to follow
immediately after the mass.
Graveside services will be
Monday, Dec 8, 2014 at 12 Noon
at Dekle Cemetery in Lake Butler, FL.

To order memorial trees or send flowers to the family in memory of Harley Bernard Mays, please visit our flower store.