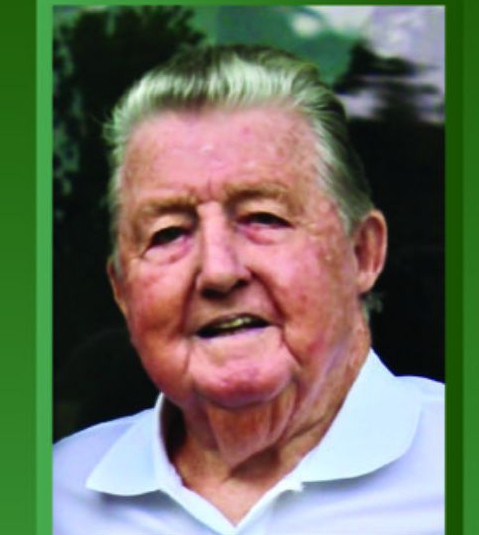 He was baptized in the newly built Cathedral of Christ the King in Mullingar in 1936. Harry started school at the age of five being taught first by the Nuns and then he advanced to the Christian Brothers School on the other side of the Cathedral.

At the age of nine he started singing in the Cathedral Choir and did so for a few years. He said he could not get his mouth around the Latin, but he loved looking out and seeing all the people in the congregation every Sunday.

Harry left school at the age of 14 to go to work to help out his mother and younger brother, Chris. He worked at Shaw’s Draperies as a handyman, at the John Lynch Saw Mill making chicken boxes and at Fitzsimmons Saw Mill making rabbit boxes and walking greyhounds.

On 21 January 1952, he enlisted into the Republican National Army at Columb Barracks in Mullingar at the age of 15 ½ years. Rules stated that you were to be at least 17 years of age. He followed his eldest brother, Gus into the Army and their father was in the Army before them. He was a Gunner with the 15th Battery and his Service Number was 94096.

During his years of service some of his duties included, but was not limited to the cleaning and care of the church on the Barracks grounds and have everything in place and ready for Mass. He was also the Colonel’s “batman” which included the care of the colonel’s uniform and also babysitting his son, among other duties.

After completing his full term of five years engagement, Harry was honourably discharged in 1957.

Upon leaving the Irish Army, he moved to England and worked for a short time in an engineering firm in Hammersmith, England before joining the P & O Company. This was a whole new experience of working and traveling at the same time and seeing the world and leaving all his family and friends behind.

In November 1965 on a trip back to England from Australia, the S.S. Arcadia made a stop in Pago, Pago, the American Samoa Islands. It was while waiting to go off duty, Harry met Michele Morris, who was heading home to Florida after a four month visit in Australia with her maternal grandmother and other family members. After two years of long distance communication and meeting up only three times in that two years, Harry and Michele were married on 16th March 1968 at St. James Catholic Church in Orlando, Florida. A marriage that lasted just shy of 54 years.

After their marriage, they lived for six months in Southampton, England, and then made their way back to Florida where Harry worked as a Chief Steward on cruise ships sailing out of Miami to the Caribbean. After a short stint, he pursued a new career as a meat cutter with Fairway Markets in the Orlando area, working in several of their locations spanning several years.

Harry ended his working career at Orlando Health in their Food and Nutrition Department. In his retirement, he enjoyed working in the garden and having his fur baby, Miley by his side and collecting eggs produced by his feathered girls. He was very proud of his three sons and often boasted how smart and clever they are, but he was most proud of how handy they are and how they helped to make his life easier. But, most of all he enjoyed time spent with Grandson Brennan. They enjoyed watching and laughing at reruns of The Three Stooges, playing the harmonica and enjoying a Sunday breakfast of Irish Sausages.

To order memorial trees or send flowers to the family in memory of Harry Francis Jones, please visit our flower store.
Send a Sympathy Card