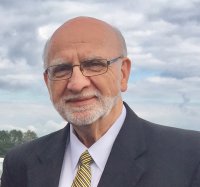 Jesse G. Eaton, 81, of Sebring, FL, entered heaven, surrounded by family, ushered in with his final breath to the words being sung, "one by one, the days the moments fleeting, til I reach the promised land," on Wednesday, November 29, 2017, after suffering a stroke on Thanksgiving and slipping into a coma.
He was born at home in Newfane, NY, to Mildred H. Eaton and Harold H. Eaton on September 2, 1936. Mable Manwarren led him to the Lord at a Bible club when he was nine years old. His faithful parents took him to church whenever the doors were open. He is preceded in death by his parents and one brother, Gerald Eaton, a missionary with Baptist Mid-Missions.
Jesse attended Baptist Bible Seminary in Johnson City, NY, graduating with his bachelor's degree a few months before his marriage to his college sweetheart, Joyce M. Peterson, on August 15, 1959. During the course of his nearly 60-year career, he earned an MA in Missions from Grace Theological Seminary (Winona Lake, IN) and served faithfully in Christian ministry as a pastor, missionary, Bible college professor, and administrator. In 1996, his alma mater, which had by then relocated to become Baptist Bible College & Seminary of Pennsylvania (and is now called Clarks Summit University), recognized his Christian leadership with an honorary Doctor of Divinity degree and he was incredibly humbled by this honor.
After their wedding, Jesse and Joyce moved to New Haven, IN, where they planted New Haven Baptist Church together. In 1967, they and their three children left for East Pakistan (now Bangladesh) as missionaries with the Association of Baptists for World Evangelism (ABWE). Jesse served until 1981 as the Administrator of Memorial Christian Hospital in Malumghat, Bangladesh.
A gifted administrator, he chaired the station council and field council during his 14 years there, also directing the Baptist Bible Institute, developing national leadership. One of the gifts that God gave him was a love of languages and he grew to be incredibly gifted in speaking Bangla, negotiating with dignitaries and preaching in the language he grew to love most. For many years, he read his Bangla Bible during his 4:30 a.m. devotions and sought out Bangla speakers to converse with in any and every situation...whether restaurant owners, complete strangers, or a Bangladeshi Brigadier-General. He found his way deeply into the heart of the Bengali people.
Upon returning to the States, he joined the administrative faculty at Baptist Bible College in Clarks Summit, PA, for five years. He then returned to ABWE to work in the home office in Cherry Hill, NJ (and later New Cumberland, PA), where his responsibilities over 26 years of service included overseeing and caring for missionaries on and off the field as Executive Administrator for Africa and Western Europe and then Director of Post-Field Interpersonal Ministries. Jesse and Joyce were members of Bible Baptist Church in Shiremanstown, PA, for twenty years, and Jesse was the Pastor of Care for the last eight of those years. In 2013, he and Joyce moved to Maranatha Village in Sebring, FL, and were active members in the community. He was the Administrative Pastor at Maranatha Baptist Church for one year until his passing.
Although his God-given gifts were many, his family would say that he was a husband, father, and grandfather extraordinaire! He adored his "Sweetheart" and sacrificed daily to make her life rich, protected, and incredibly happy. They shared wonderful daily routines of time over coffee, reading the Bible together and ending with a round of Skip-Bo or Scrabble! He had a laugh that filled the room, and loved the hilarious stories the extended family loved to retell, often at his expense.
His personal world reflected his core beliefs, his unwavering integrity, and dedication to serving God to his utmost ability, and he did that with precision and extraordinary gift of organization. His thoughts over 81 years have been documented in files reflecting carbon copies of every letter he has written in that span of time and personal notes and perspective throughout each neat stack of reading or tab of hundreds of files. He has left a legacy that is unparalleled not just in how he lived his life, but in the deep perspectives he left in writing!
No one will take the place of those strong arms that hugged like a gentle bear, and cherished each child and grandchild. But he would not want us to grieve long...He is with his Savior! This is the ultimate prize of his entire journey!
He is survived by Joyce, his wife of 58 years; son Jim and wife Natalie; daughter Joanie Knaus and husband David; daughter Julie Eby and husband Marlin; 10 grandchildren; six great-grandchildren; and two sisters, Barbara Eaton of Sebring, FL, and Janice McLucas of Lakeland, FL. He is dearly missed by all the family and the Maranatha Village community, but they rest assured in his profession of faith and life of ministry and faithfulness to his Savior and Lord. We grieve, but not as those without hope (1 Thessalonians 4:13).
The funeral service will be held at Maranatha Baptist Church (35 Maranatha Blvd, Sebring, FL 33870) on Saturday, December 2, 2017 at 10 a.m. with a viewing at 9 a.m. In lieu of flowers, gifts may be given to Children of the Hills ( www.childrenofthehills.org/donations ). A memorial service will be held the week of Christmas at Bible Baptist Church in Shiremanstown, PA.
"According to my earnest expectation and hope, that I shall not be put to shame in anything, but that with all boldness, Christ shall even now, as always, be exalted in my body, whether by life or by death. For to me, to live is Christ, and to die is gain." Phil. 1:20-21

A memorial service will be held the week
of Christmas at Bible Baptist Church
in Shiremanstown, PA.

To order memorial trees or send flowers to the family in memory of Jesse G. Eaton, please visit our flower store.
Send a Sympathy Card