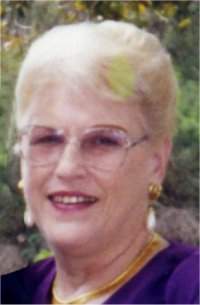 JEFFERSON, Joanne S., born in Cleveland, OH on June 19, 1937 as Joanne Susan Barnovsky, died peacefully, Thursday afternoon, December 4, 2014 surrounded by her loving husband, family and good friends. While praying the rosary, the angels came down and guided her way. Her smile, sweetness, sense of humor and love for her family & friends will be missed by all. Joanne grew up in the Cleveland, OH area, graduating from Middlefield in 1955. She once made a crumbly peach pie that won her a kitchen full of appliances. This was farm country and Joanne was a city girl, so she moved to Cleveland and began working at Western Electric, where she met her first husband, Harley. They married and had 3 children, Pat, Mike & Diane. After living in Maple Hts, Bedford & Twinsburg, OH, she moved to Sebring, FL in 1970. Joanne attended SFJC (aka--South FL State College now), receiving her AS degree in Cosmetology. She owned and operated Joanne's Beauty Salon at The Palms of Sebring for over 25 years. Joanne was a member of the Junior Women's club for many years. For fun she painted, did crafts, played the accordion & banjo. She was a faithful Catholic who attended St. Catherine's Catholic Church. Joanne met her second husband, Roger Jefferson at a Polka dance in Sebring. They married on Dec. 28, 1996. She was the love of his life and spent countless hours, by her side while she was at Kenilworth Care & Rehab Ctr. Joanne is survivedby her husband, Roger Jefferson, Sebring, FL, sister-in-law, Alease (Golden), Claudeville, VA, daughter, Pat (Dean), Sebring, daughter-in-law, Bobbie (John), Sebring, grandchildren, Matthew (Melissa), Tampa, FL, Stephanie (Jared), Louisville, TN, Melissa & Jonathan, Sebring, her siblings, Ed, Cleveland, OH, Bob (Janet), Warren, OH, Dorothy, Garrettsville, OH, Andy (Eileen), New Castle, PA and many nieces and nephews. She was preceded in death by her parents, Andrew & Barbara (Mikovsky) Barnovsky, mother-in-law, Inez, brother, James, son, Michael & daughter, Diane. Her viewing will be Monday, Dec. 8, from 7-9 PM at Morris Funeral Chapel. The funeral mass will be Tuesday, Dec. 9, at 10:00 AM, at St. Catherine's Catholic Church, 820 Hickory St, Sebring, FL 33870. A graveside service will follow at Lakeview Memorial Gardens, 854 Memorial Dr., Avon Park, FL 33825.

To order memorial trees or send flowers to the family in memory of Joanne S. Jefferson, please visit our flower store.