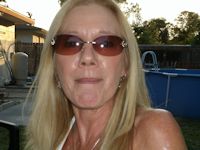 SNEESBY, JUDITH L., entered Gods Kingdom, March 6, 2014. She was born in Libertyville, IL, daughter of the late, Fred and Verna Woertz Hill. A graduate of Libertyville High School and married Russell Sneesby in 1957. They moved to Miami in 1961 and was branch manager of Sun Trust Bank, Briar Bay Branch, Cutler Ridge. In 1990 they moved to Sebring and she continued with Sun Trust until she retired. Judith was honored by the United Way, naming her Citizen of the Year for Central Florida in 1997. She was preceded in death by her brother, Thomas Hill and is survived by her loving family, husband, Russell T. Sneesby; daughter and her husband, Sandi and Mason Whidden all of Sebring; sons and their wives, Gary and Sue Sneesby Cora Springs, FL; Bill and Sharon Sneesby, Wesley Chapel, FL; grandchildren, Gary (Alli) Whidden, Kristin Whidden, Christopher, Lauren, Samantha and Katherine Sneesby; and one great granddaughter, Savannah Belle Whidden. A Celebration of Judy's Life will be held on Saturday, April 5, 2014 at 2:00 pm at Morris Funeral Chapel in Sebring. The family will receive friends one hour prior. In lieu of flowers the family requests memorial contributions to: Good Shepherd Hospice.

A Celebration of Judy's Life will be
held on Saturday, April 5, 2014 at 2:00 pm
at Morris Funeral Chapel in Sebring.

To order memorial trees or send flowers to the family in memory of Judith L. Sneesby, please visit our flower store.