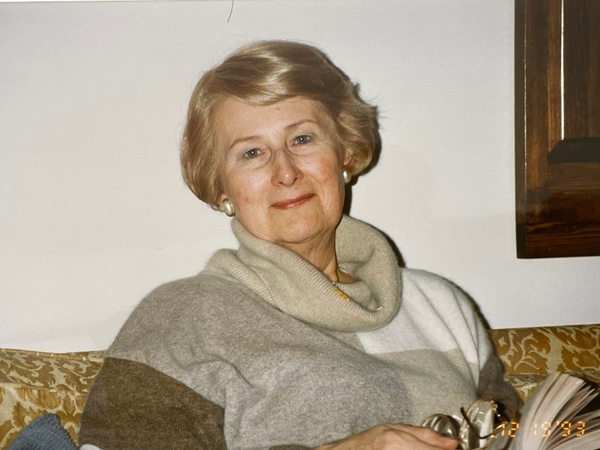 At age 18 she met her true love, Bernard, and they married in October 1950.  Looking for a bit of overseas adventure they set out on a Voyage to the US on the HMS Queen Mary in 1957.  Husband Bernard had applied for and been accepted as a young design engineer at Morris Pumps in Baldwinsville, NY.  June and Bernard enjoyed the US and what was initially to be a two year working visit turned into a permanent home.  They never lost their love and respect for England but they happily decided to live out the rest of their lives in the United States, ultimately becoming US citizens.  There in the town of Baldwinsville they made many life-long friends.  During the late fifties, June worked for an advertising agency in Syracuse, a job she enjoyed.

After ten years without children June and Bernard were blessed with three boys; Phillip, Mark and Neil, all born about 2 years apart beginning in 1960.  Some have said there must have been something in the water in Baldwinsville that started the chain of pregnancies.

In 1964 the couple moved Media, PA for a few years where more life-long friendships were made.  June and Bernard returned to Baldwinsville, NY in 1971 where they spent the next 18 years and raised their three boys.

June was an outstanding cook and the couple loved to entertain, hosting many dinner parties with friends and family.

June became the Court clerk for the village of Baldwinsville where her dedication and organizational skills were greatly appreciated.  June enjoyed her legal work at the court house and police department where she became good friends with the officers and staff.

Morris Pumps, where husband Bernard worked now managing International Sales, was purchased by Gould's Pumps in 1981 and in 1989 the company was moved to Ashland, PA.  This necessitated a move by the couple to nearby Elysburg, PA where they built a new home and were visited often by their three boys, family and many friends.

Now both retired, June and Bernard moved to sunny Sebring, FL in 1998 where their eldest son Phillip, his wife Tish and their two children Ian and Brittany also live.  June and Bernard loved to travel together and made many overseas and domestic trips.

June was preceded by her husband of 56 years Bernard in 2007.  She is survived by her three sons, Phillip of Sebring, FL, Mark of Houston, TX, Neil of Charlotte, NC and six grandchildren.

The Memorial Mass for June will be conducted at 11 a.m. Friday, November 27, 2020 at St. Catherine Catholic Church in Sebring.  Memorials can be made to Cornerstone Hospice, 209 N. Ridgewood Drive, Suite 3, Sebring, FL 33870.  Funeral arrangements have been entrusted to Morris Funeral Chapel, Sebring.

To order memorial trees or send flowers to the family in memory of June Lockwood, please visit our flower store.