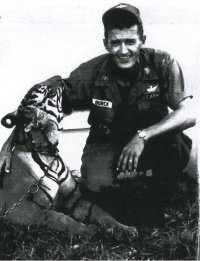 BORCK, KEITH ROY, 84, of Sebring, FL passed away Monday, April 28, 2014. Keith was the son of Carl and Esther Borck of Baraboo, WI. He was born October 24, 1929 in Baraboo. He was united in marriage to Charlene (Smith) on November 9, 1950 at North Freedom Baptist Church. Keith attended school in Baraboo and graduated from Baraboo High School in 1948. After graduation Keith joined the United States Army. While in the Army he trained to be a helicopter pilot and made it a career. In 1962 while serving in the Republic of Viet Nam, Keith, distinguished himself by earning the Distinguished Service Cross (Our nation's second highest military medal) for extraordinary heroism in action. He was the first soldier to receive this award in the Viet Nam conflict. After Viet Nam, Keith proved to be one of the Army's top pilots by being selected to the "Executive Flight" tasked with moving our President around by helicopter. He completed his Army career with the "Executive Flight" having served the Lyndon Johnson and Richard Nixon administrations. Keith and his wife lived in Key West, FL after the Army, for 30 years and spent the last 10 years in Sebring, FL. Keith is survived by his wife of 64 years, Charlene; his daughter Debbie Evans (Randy), Grandchildren Brent Evans of Ft. Myers, FL and Shelley Evans of Salem, Mass. Keith was preceded in death by his parents and son David R. Borck. Services will be held in Baraboo, WI. Memorial are requested to Florida Sheriff Youth Ranch, Boys Ranch, FL 32060.

Services will be held in Baraboo, WI.

To order memorial trees or send flowers to the family in memory of Keith Roy Borck, please visit our flower store.
Send a Sympathy Card