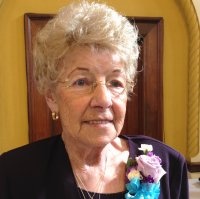 Louise Bernice Tyler Shubert, 80, of Waterloo, IA, died Thursday, January 28, 2016 of heart failure following a lengthy illness with complications from lung cancer and pneumonia at her home in Sebring. She had been under the care of Good Shepherd Hospice also of Sebring.
She was born November 23, 1935 in Davenport, IA, the daughter of 1950 and 1954 Iowa gubernatorial candidate Howard Harry Tyler, Sr. and Bernice Lucille Buntenbach Tyler. She married Billie Lee (Bill) Shubert January 15, 1955 at the Church of the Open Bible in Waterloo.
Mrs. Shubert was a 1953 graduate of Waterloo East High School. She initially went to work for Allen Memorial Hospital, then Rath Packing Company from 1954 to 1959. Thereafter, she worked for Deere & Company in a variety of positions, including accounts payable, payroll, and personnel, from 1959 until her retirement in 1985.
Mrs. Shubert was a charter member of the American Business Women's Association (ABWA) from 1965 to 1985 and was president of the Waterloo Chapter in 1985. She and her husband were members of the Hayloft Square Dance Club in Cedar Falls for 25 years. They also served as co-chairmen of the 1989 Iowa State Federation of Square and Round Dance Club's annual state-wide convention held in Waterloo.
In her retirement years, Mrs. Shubert was an active member of the Landlords of Black Hawk County and as a volunteer for Meals-on-Wheels, delivering hot meals to elderly shut-ins. She also enjoyed knitting, cross stitching, and spending quality time with her family boating, camping, motorcycling, and traveling. Her travels took her across parts of Europe and North America in search of lost relatives and genealogy records, which confirmed her ancestral family ties to John Tyler, the 10th president of the United States, and Cornelius Vanderbilt, the industrialist.
For the past 20 years, Mrs. Shubert and her husband maintained a second home in Sebring where they established many new friendships at Highland Oaks Resort and First Presbyterian Church.
Mrs. Shubert is survived by her husband, Bill; three sons, Craig (Sherri Moyer) of Hudson, OH, Jeffrey of Waterloo, and Michael (Julie Krause) of Cedar Falls, IA; and, a grandson, Nicklaus of Waterloo; a brother, James (Melinda Eubanks) Tyler of Gadsden, AL; a brother-in-law, Robert (Luanne Hartman) Shubert of Waterloo; four nieces and five nephews.
Preceded in death by her parents, a brother, Howard, Jr., two sisters, Ruth and Edith, a daughter-in-law, Tammie Kohl Shubert, and three grandchildren, Jeffrey Lee Shubert, Jason Eugene Shubert, and Mitchell Dean Shubert.
A memorial service will be held at 11:00 a.m., Monday, February 1 at First Presbyterian Church in Sebring with Rev. Darrell Peer presiding. Burial will be at Elmwood Cemetery in Waterloo.
In lieu of flowers, memorials may be directed to First Presbyterian Church in Sebring or Westminster United Presbyterian Church in Waterloo.

A memorial service will be held at 11:00 a.m.
Monday, February 1 at First Presbyterian Church
in Sebring with Rev. Darrell Peer presiding.
Burial will be at Elmwood Cemetery in Waterloo.

To order memorial trees or send flowers to the family in memory of Louise Bernice Tyler Shubert, please visit our flower store.
Send a Sympathy Card