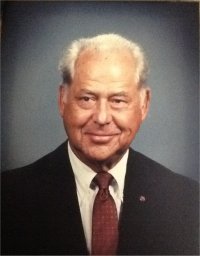 Luther S. Safriet, Jr. died at the age of 97 on March 28, 2014 in Sebring, Florida.
Luther, son of Luther and Pearl Green Safriet, was born on January 21, 1917 in Williamsburg, Kentucky. He graduated from Cumberland College Academy and Morehead State University in Kentucky. He was a teacher and Director of the Harlan (Kentucky) Area Vocational Education School for eight years, and Coordinator of the Mayo State Vocational School in Paintsville, Kentucky for twenty-two years until his retirement in 1975. Following his retirement, he lived in Stewartstown, Pennsylvania for eight years, and then moved to Sebring in 1983.
Luther married the love of his dreams, Wilma Selvey, in June, 1943, and enjoyed 64 years of exploring life with her until her death in 2007. They had two daughters, Judith Ann Daugherty of Daytona Beach Shores, FL, and Barbara Jean Safriet, of Orcas Island, WA.
Luther was very active in promoting educational opportunities for all, having served as the President of the Kentucky Vocational Association, the Kentucky Industrial Education Association, and the Eastern Kentucky Educational Association, as well as an accreditation consultant for the Southern Association of Schools and Colleges. He also was a life-long active supporter of many civic organizations: Rotary International (serving as a member, club president and District Governor, and honored as a Paul Harris Fellow), the Girl Scouts of America, the American Red Cross, and the Lions Clubs International (honorary life member). Luther was an active member of the Open Door Sunday School Class of the First United Methodist Church, and the Rotary Club of Sebring (for which he sold truckloads of apples, and cooked thousands of pancakes and hundreds of gallons of spaghetti sauce for their fundraisers).
Luther is survived by his brother Irvin Safriet of Sebring; daughter Judith and son-in-law Edward Daugherty; daughter Barbara; grandson Brian Daugherty, and great-grand daughter, Dylan Mia of San Diego; grandson Michael Daugherty and his wife Melissa, and great-grand sons Chase and Miller of Winter Park, FL; brother-in-law Earl Killian; sister-in-law Mary Hensley Wagner; and several nephews and nieces.
A memorial service is being planned for later in the Spring. Arrangements are entrusted to the Morris Funeral Chapel, of Sebring, FL (863-385-0101).

Proceded In Death By

A memorial service is being planned for
later in the Spring.

To order memorial trees or send flowers to the family in memory of Luther S. Safriet, Jr, please visit our flower store.
Send a Sympathy Card