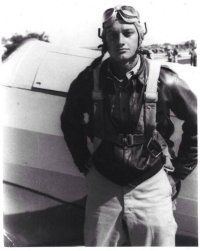 Maynard Richard "Dusty" Rhoades, 91, Colonel, USAF, Sebring, took his final flight on September 13, 2014 at his son's home in Sebring. Maynard was born in Kathleen, Florida on November 14, 1922 to George and Sarah Rhoades. He grew up sixth of seven children, poor, barefoot, and scrappy. Maynard boarded horses and hunted quail for lunch money. He was a true Florida Cracker. He studied the plumbing profession, a family tradition. Dusty graduated from Sarasota High School.

While camping on the Myakka River, Maynard and his best friend, Harper Thompson, listened to the car radio and heard the reports of the invasion of Pearl Harbor. Within hours, they were at the recruitment center, Harper joined the Marines while Maynard signed up for the Army Air Corps. Maynard flew many missions in combat, including flying the "Hump" and spending three years in Burma and China. After the war, Dusty studied at Stetson University. He met and married Valree Parker in Pahokee. Dusty flew briefly for National Airlines. He was then recalled to Air Force active duty and flew many hours as an officer, including the Berlin Airlift. He was later assigned to fly during the Korean War. Maynard's career progressed to Air Rescue and he commanded a squadron in Thailand during the Vietnam War. The Colonel accrued over six years of combat duty. His military decorations include The Legion of Merit, The Distinguished Flying Cross, and two Bronze Stars.

After 31 years of proud military service to his Country, the Colonel retired with Valree to Sebring. Maynard worked for a time selling real estate around Highlands County and, then, fully retired to Lake Charlotte.

Dusty enjoyed bridge, hunting, fishing, waterskiing, and tearing things apart. He never met a stranger and had the gift of gab. Maynard was an active member and volunteer at Disabled American Veterans and was a proud member of The Rotary Club of Sebring (Paul Hanis Fellow), Elks Club, VFW, and Masonic Lodge, Sebring.

Maynard was preceded in death by his wife, Valree, in 2006, and is survived by his four children, M. Stephen Rhoades, Brigadier General, U.S. Army, Retired (Vivian), Stephenie Staten (Rick), Clifford Rhoades (Suzette), and Charlene Tavernit (Jim), thirteen grandchildren, and five great grandchildren. He and Valree were proud that all four of their children are University of Florida graduates. Go Gators!

There will be a visitation at Grace Bible Church, Sebring, Saturday, September 20, 2014, at l P.M. The memorial service will follow at 2 P.M., Pastor Dustin Wood officiating. After the memorial service, the family will receive friends at the Law Office of Clifford R. Rhoades, P.A., 2141 Lakeview Drive, Sebring.

Colonel Rhoades will be interred at Arlington National Cemetery with military honors where Valree waits for him.

There will be a visitation at
Grace Bible Church, Sebring,
Saturday, September 20, 2014, at l P.M.
The memorial service will follow at 2 P.M.,
Pastor Dustin Wood officiating.
After the memorial service,
the family will receive friends at
the Law Office of Clifford R. Rhoades, P.A.,
2141 Lakeview Drive, Sebring.

Colonel Rhoades will be interred at
Arlington National Cemetery with military
honors, where Valree waits for him.

The world has lost a great man..... Rest In Peace Dusty.

Dear Charlene & Family,
We are so sorry to hear of your loss. Your Dad was a part of the greatest generation, and we honor him for that and all he did for our country. May he rest in peace.
Sincerely,
Lance & Tina Sisco


To order memorial trees or send flowers to the family in memory of Maynard Richard "Dusty" Rhoades, please visit our flower store.
Send a Sympathy Card