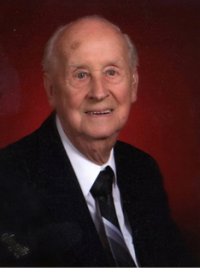 Rev. James D. Maxwell II, 95, passed into the presence of His Lord at 5:10 a.m. on February 20, 2012, at Maranatha Manor in Sebring, FL after a brief illness.
When he was 14, the same year his mother died, James accepted Jesus Christ as his Savior. He graduated from high school in Shellsburg, IA. In 1938 James and Helen Lubbock were united in marriage. In 1953 he enrolled in Northwestern College in Minnesota to prepare for ministry. He completed his work at Prairie Bible Institute in Alberta, Canada, and received his master's degree from Trinity College in Florida.
Rev. Maxwell taught at two Bible colleges: Omaha (now Faith) Baptist Bible College and Peace River Bible Institute in Alberta, Canada. He planted five Baptist congregations in Colorado and Arizona, as well as serving as interim pastor in several churches.
Rev. Maxwell was preceded in death by his father and mother, Thomas and Alta Maxwell of Shellsburg, IA; his wife Helen Lubbock Maxwell; his sister, Genevieve; and his brother, Laurence. He is survived by a son, James III of Ankeny, IA; daughters Sharon McGrew of Florissant, CO and Ruth McFarland of Fairplay, MO; 6 grandchildren; 11 great-grandchildren; a half-brother, John Maxwell of Cedar Rapids, IA; and nieces and nephews.
A service was held Thursday, February 23, at Ankeny Baptist Church, Rev. David Strope officiating. The committal service was at First Baptist Church of Vinton, IA. He was buried in the Oakwood Cemetery near Shellsburg, IA.
Memorials may be given to the Library Fund at Faith Baptist Bible College and Theological Seminary, 1900 NW Fourth Street, Ankeny, Iowa 50023.

A service was held Thursday, February 23,
at Ankeny Baptist Church,
Rev. David Strope officiating.
The committal service was at
First Baptist Church of Vinton, IA.
He was buried in the Oakwood Cemetery
near Shellsburg, IA.


To order memorial trees or send flowers to the family in memory of Rev. James D. Maxwell II, please visit our flower store.