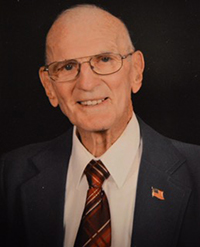 Rev. Joseph Crosby Chapman lll, (91) was ushered into the presence of his Lord and Savior on March 10, 2017. He is survived by his wife, Lucy of 70 years and children Judith (Bill) Kirtland of Clearwater, FL, Shirley (Tom) Kurz of Uniontown, Ohio, David (Linda) Chapman of Wickliffe, Ohio and Diana (David) Conrad of Xenia, Ohio, and by 17 grandchildren and 39 great grandchildren. He is also survived by siblings Ellen (Harry) Dixon, Bill (Marie) Chapman, Harold (Irene) Chapman, Bob (Sally) Chapman, and Elizabeth (Jim) Wilgus. He is preceded in death by his parents, Joseph and Ellen (White) Chapman, one grandson, Samuel J. Kirtland and one great granddaughter, Audrey Ann Huffstutler.
Joe was born November 4, 1925, in Philadelphia, PA to Joseph and Ellen (White) Chapman. Joe was led to the Lord as a young teen by his mother. He served in the United States Navy from 1943-1946. He attended the Bible Institute of Pennsylvania and is a graduate of The Kings College in New Castle, Delaware.
Joseph and Lucy were married on August 10, 1946 in Stamford, CT. Joe was ordained for the ministry of the gospel on September 7, 1952 by the Eastern Conference of the Bible Protestant Church. He and Lucy served together in ministry in churches located in Ohio: Akron, Springfield, Rodney, and Gallipolis, as well as in Danbury, CT, Cortland, NY, and Bridgeton, NJ. He served on the board of Scioto Hills Baptist Youth Camp in Ohio. Both before and after his retirement from pastoral ministry, he carried on an itinerant ministry of preaching and music in many churches and camps across the country.
Joe was a faithful, active member of Maranatha Baptist Church, Sebring, FL. He contributed greatly to the music ministry of the church and was a long time member of the Highlands County Concert Band. He also was employed for 15 years at Morris Funeral Chapel.
A memorial celebration in honor of Joseph Chapman will take place at 11:00 am, Wednesday, March 15 at Maranatha Baptist Church in Sebring, FL. A one-hour visitation will precede the service. The burial will be at 10:30am on Thursday, March 16 at the National Cemetery in Sarasota, FL.
In lieu of flowers the family requests that memorial contributions be designated for support of the Maranatha Manor through Maranatha Baptist Church.

A memorial celebration in honor of
Joseph Chapman will take place at 11:00 am,
Wednesday, March 15 at Maranatha Baptist Church
in Sebring, FL. A one-hour visitation will
precede the service. The burial will be at
10:30am on Thursday, March 16
at the National Cemetery in Sarasota, FL.


To order memorial trees or send flowers to the family in memory of Rev. Joseph Crosby Chapman lll, please visit our flower store.