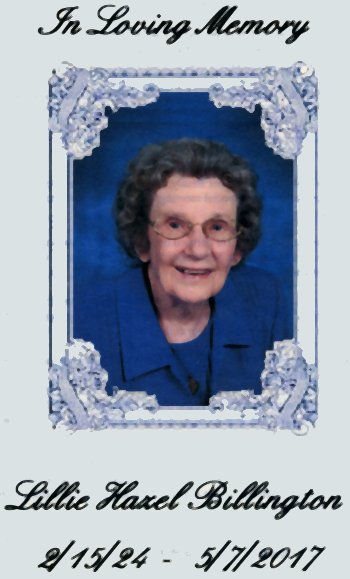 Lillie Hazel Billington was born on February 15, 1924 in Akron, Ohio, to Will and Geneva Hill.
She was saved at the age of eight.
When she was 12 years old, they moved to Copley, Ohio where they lived in the country. On the farm, after school, she had her farm chores plus taking care of her younger brother while her mother worked in the fields.
She graduated from Copley high school in 1942 and then attended Akron Bible Institute.
During the war years, she worked at the Seiberling Rubber Factory. She helped make rubber boats for the war effort.
She attended a new church with her family. Vernon's uncle was the pastor of the church and they were having special meetings. Vernon was the guest speaker. It was love at first sight for him.
Dad asked mom out on a date. He pursued her for six years until she finally said "Yes" and they were married on September 5, 1948. They ministered together for 46 years in churches in Ohio.
She worked at Lazarus sporting goods department while in Columbus. When they moved to Fostoria, Ohio, she did alterations at a men's clothing store for 15 years. She worked to help put us girls through college.
Hazel had three daughters. She was preceded in death by her husband Vernon, her daughter Carol, and one grandson.
Hazel and Vernon were married 63 years. She is survived by two daughters, Linda Hyder and husband Wayne; Joyce Logan and her husband Bill; six grandchildren and eight great-grandchildren.
For her 50th high school class reunion booklet she wrote "My major priority is to Give for Jesus who died for me. I have a concern for people to be properly related to God. At my age of life, I have but one bit of advice.
Be ready when the master taps you on the shoulder."
She went to be with her Savior on May 7, 2017 which has been her greatest desire.
Her favorite memory verse is Isaiah 41:10.

Fear thou not for I am with thee: be not dismayed for I am thy God:
I will strengthen thee; yea, I will help thee;
yea, I will uphold thee with the right hand of my righteousness.

Service was held May 12, 2017 at 11:00 AM at Maranatha Baptist Church, Sebring Burial At Lakeview Memorial Gardens, Avon Park.

Service was held May 12, 2017 at 11:00 AM
at Maranatha Baptist Church, Sebring
Burial At Lakeview Memorial Gardens, Avon Park

To order memorial trees or send flowers to the family in memory of Rev. Vernon K. Billington, please visit our flower store.
Send a Sympathy Card