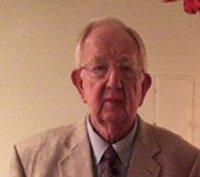 BOND, REX E., of Sebring passed away on January 25 in Summer Hospice House of Sebring. He was born 3/3/1928 in Cliffview, VA and grew up in Blackstone, VA. Rex served in the U.S. Army with the Army of Occupation in Korea from 1946-1948. In 1951, he married the former Anne Dozier of Norfolk, VA. His business career started in banking with the Bank of Virginia, Richmond, VA. Later he served as Director, President and Chairman of the Bank of Occoquan. He also served as Mayor of Occoquan, VA. In 1959, Rex and Anne and their two sons, Steve & Bill moved to Milton, FL where he was President of the Santa Rose State Bank. In 1962, they moved to Sebring where he became President and Chairman of the Board of the First National Bank of Sebring and later the Avon Citrus Bank of Avon Park. He was in banking for 28 years. Rex served as the first Chairman of Board of Trustees of the South Florida Community College for 10 years. He also served as a member of the Sebring Utilities Commission, Sebring Airport Authority, an active Lion's Club member, Past Master of Sebring Lodge #249 F & AM, member of Highlands Shrine Club, Sebring Elks Lodge, Past President of Sebring Little League and Dixie Youth League Baseball, Director of united Telephone Co. (later Sprint) for 21 years. He was General Manager of the Sun 'n Lake of Sebring improvement District for 13 years, retiring in 1993. Rex is survived by his wife, Anne, and son Stephen (Paula) Bond. He was predeceased by his son, William. He is also survived by grandchildren, John Harry (Cassie) Bond of Sebring and Grady Rex (Lisa) Bond of Haddenfield, NJ; Great grandchildren, Dylan Bond, Allie Pate of Sebring and Katherine and William Bond of Haddenfield, NJ; Sister, Donna Everhart of Morristown, TN and extended family, John (Betty) Koonce and Donald (Barbara) Koonce and Children of Richmond & Charlottesville, VA and several nieces and nephews. The family will greet friends at the Morris Funeral Chapel from 10-11 AM, followed by a memorial service at 11 AM on Saturday, February 10, 2018. If desired, donations may be made to the First United Methodist Church, 126 S. Pine St., Sebring or Diabetic Research Institute foundation, 200 South Park Road, Ste. 100, Hollywood, FL 33021. Military Honors will be held February 9, 2018 at Sarasota National Cemetry, Sarasota, FL.


Condolences or Life Stories may be expressed in his Guestbook. Morris Funeral Chapel, Sebring, Fl.

The family will greet friends at the
Morris Funeral Chapel from 10-11 AM,
followed by a memorial service at 11 AM
on Saturday, February 10, 2018
Military Honors will be held February 9, 2018
at Sarasota National Cemetry, Sarasota, FL.

To order memorial trees or send flowers to the family in memory of Rex E. Bond, please visit our flower store.