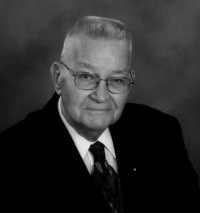 BARR, Robert H. 95, passed into the presence of his Lord on March 16, 2016. He was born on September 12, 1920 in Spring Lake, MI to Claude and Gladys(Stevens) Barr. Mr. Barr is survived by his loving wife Esther (Truax) Barr, his daughter, C. Candace Swanson of Crown Point, IN; sons Richard (Glenna) of Tracy, CA, Steven (Lynette) of Elyria, OH and Timothy (Kathleen) of Rochester Hills, MI; Two Stepchildren, Wendy (Greg) Busick of Brighton, MI and Jonathyn (Nancy) Truax of Fort Wayne, IN; 14 Grandchildren and 20 Great Grandchildren. He was preceded in death by his parents, sister Eleanor Wright and wife of 60 years, Evelyn (Fraaza) Barr. An engineering graduate of Michigan State College, he worked mainly in research and development at Continental Motors Corp and John Wood Manufacturing Co. in Muskegon, MI; General Motors Corp in LaGrange, IL and Cleveland, OH; Aerojet-General Corp. in Azusa and Sacramento, CA and also at Cape Canaveral, FL; the Boeing Corp. at Kennedy Space Center; and the A.Y. McDonald Corp. in Dubuque, IA. Involved in the early days of space exploration, he assisted in the design, and testing of the Vanguard Rocket, and had responsibility for the second rocket stage during launching. He also worked on the early phases of the Saturn Moon Rocket program. He was a member of several professional societies, including The Society for Experimental Stress Analysis, The American Ordnance Association, and the Society of Automotive Engineers. He holds patents for a Vapor Recovery Service Station Nozzle, and an Under Pump Emergency Valve for Service Station pumps. The last 30 years of his professional life was spent as Staff Engineer for Sommer and Sons Companies in Elyria, OH, where he was involved in sales of Manufactured Housing, and development of a 500 home Manufactured Home Park. In addition, he sold and erected Modular Housing throughout the Northeast Ohio area. Mr. Barr was a committed Christian and was, since his teen years, involved in his local church. He directed church choirs in Michigan, Ohio, California and Florida, and served as song leader and on the Deacon Boards in several Baptist Churches. From 1950 until his retirement to Florida in 2003, he taught Adult Sunday School. He was a member of The Christian Business Men's Committee, and since 1976 an active member of the Gideons International. As a Gideon he held offices in the local Camp, as well as State Offices in both Ohio and Florida. Presenting the Gideon ministry in various churches was a special part of his ministry. Mr. Barr was also privileged to serve as a Trustee of Western Baptist Bible College, a Council member of Baptist Church Planters, and a Director of Regular Baptist Fellowship, Inc. (Maranatha Village) A Memorial service for Robert H. Barr will be held at Maranatha Baptist Church in Sebring, FL on March 31, 2016 at 11:00 AM with Rev. Stan Mohr officiating. Family will receive friends one hour prior to the service. Memorials may be made by providing Bibles through the Gideon Expressions Card Program, P.O. Box 1635, Sebring, FL 33871-1635 or Good Shepherd Hospice, 1110 Hammock Road, Sebring, FL 33870.

A Memorial service for Robert H. Barr will be held
at Maranatha Baptist Church in Sebring, FL
on March 31, 2016 at 11:00 AM with Rev. Stan Mohr
officiating. Family will receive friends one hour
prior to the service.

To order memorial trees or send flowers to the family in memory of Robert H. Barr, please visit our flower store.
Send a Sympathy Card