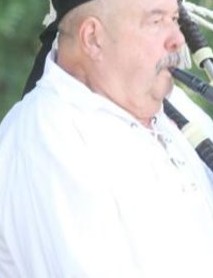 Robert W. Campbell, 65, of Lake Placid died Tuesday, Dec. 3 at Advent Hospital Lake Placid. Mr. Campbell retired in May, 2012 after a 37-year career in law enforcement, most of that time as a deputy with the Highlands County Sheriff’s Office. On his first day as a detective for HCSO he opened an investigation of a newborn baby found on the steps of the courthouse. He kept tabs on the child for several years after the case closed. He was proclaimed the county’s official bagpiper by the Highlands County Commission during the tenure of Sheriff Susan Benton, and he still holds that honorary designation. He played bagpipes at funeral services for fallen and retired first responders across Florida, representing the sheriff’s office until his retirement. He was a bagpiper at the Florida Peace Officer Memorial ceremonies in Tallahassee for six years representing Highlands County. He performed at Day of Prayer on the courthouse lawn for several years and at annual 9/11 remembrance ceremonies. Mr. Campbell continued to play after his retirement, providing his talent to all who requested. He was a member of Jacobite Pipes and Drums in Sarasota for several years. He mentored about two dozen bagpipe students since mastering the instrument himself and was avid in his pursuit of perfecting his skills. Mr. Campbell was instrumental in bringing bagpipers from outside the area to provide authentic bagpiping and garments when Highlands Lakeside Theatre staged the award-winning “Brigadoon.” Mr. Campbell is a charter member of the Highlands County chapter of Fraternal Order of Police, serving as president for four years. Highlighting his tenure as president was paying off the lodge mortgage and hosting a “mortgage burning” party. He was also a charter member of the Scottish American Society, now named the Celtic American Society. Mr. Campbell is survived by his wife of 30 years, Linda; a son, Travis Campbell of Melbourne; daughters Cathy Delaney Keck (Don) of Lake Placid and Suzanne Delaney Wilson (Rick) of Debary; a sister, Cynthia Campbell of Crawfordville; four grandchildren, Tayshaun Campbell, Morgan Keck, Jillian Wilson, and Jake Wilson. He was predeceased by his parents Guy Luckett “Lucky” and Ruth Wade Campbell. Visitation will be at 1 p.m. Saturday at First Baptist Church of Lake Placid. Funeral services will follow at 2:00 PM.

To order memorial trees or send flowers to the family in memory of Robert W. Campbell, please visit our flower store.