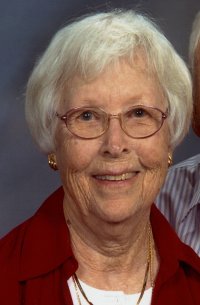 NICHOLSON, Ruby May Hoyt, 89, peacefully passed away Wednesday, February 12, 2014, at The Palms of Sebring. Ruby was born in Turkey Ridge, Richland, Missouri on April 21, 1924 to Elmer Towle and Ruby May Hoyt. The family moved to Sebring in 1929 and Ruby graduated from Sebring High School in 1942. After leaving Sebring for some time, she returned in 1963, much to her great delight, with her husband Cy and two children. She worked as the secretary at the First Christian Church until her retirement. She and Cy spent many years volunteering at the church in many capacities. She was ahead of her time in reading and researching that foods can cause disease and she decided to cure her arthritis by altering her diet in 1976. Several years later she was pain-free and self-published a book, Housewife Beats Arthritis With Simple Diet in 1979. She was interviewed by newspapers and TV stations throughout the state, thus helping to spread the word that people can make a difference in their health through their diet. She enjoyed sewing, crafts, gardening, traveling and most of all, spending time with her family. She was preceded in death by her parents and four brothers Elmer, Jack, Clyde and Kenneth. She is survived by her loving husband of 62 years, Cy, daughter Barbara (Fred) of Gainesville, Florida, son John (Terri) of Crawfordville, Florida and five grandchildren: Jason (Debbie) of Clermont, Florida; Armon of Sevren, Maryland; Jaclyn of Gainesville, Florida; Renee of Baltimore, Maryland and Kaylene (Brandon) of New York, New York. A memorial service will be held on Monday, February 17 at 11:00 a.m. at the First Christian Church in Sebring, 510 Poinsettia Avenue with Rev. Ron Norton officiating. Her ashes will be buried in the Memorial Garden at the church. In lieu of flowers, she requested a memorial can be made to your favorite charity.