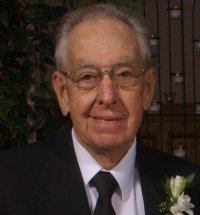 Samuel J McCaman, Sr. was born in Michigan to Earl and Hazel McCaman in 1923. He married Donna Jehnsen, daughter of Bill and Emma Jehnsen, in 1945.
Sam farmed with his father for 11 years before he moved to Chicago in 1956 with his young family to prepare for the ministry in the Church of the Brethren. He served as a pastor in several states before retiring to Lorida, Florida in 1988. In Florida he served as a chaplain in the Palms of Sebring for 11 years. Sam passed away on May 1, 2014 and is survived by his wife, Donna, and two sons, Tom and Gary, 6 grandchildren, 11 great grandchildren and 2 great-great grandchildren. He was preceded in death by a son, Sam Jr. Donna now lives in the Palms of Sebring.
A memorial service will be held in the Kesselring Square of Palms of Sebring on Saturday, May 24th, at 2:00 PM.

Preceded in death By

A memorial service will be held
in the Kesselring Square of Palms
in Sebring on Saturday, May 24th, at 2:00 PM.

To order memorial trees or send flowers to the family in memory of Samuel J McCaman, Sr, please visit our flower store.