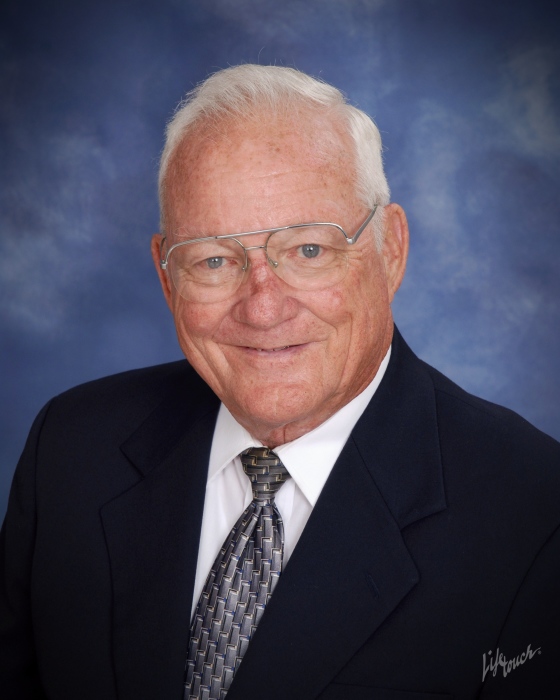 Bill was born in West Palm Beach and raised in the glades on Lake Okeechobee in the small town of Canal Point not far from Okeechobee City.  His father Will Jernigan was a chemist for US Sugar Corp, his mother Amanda was an elementary school teacher.  He played trombone in the Pahokee High School band, was on the debate team (many of his friends and family can understand why) his senior class was less than 30 students.  He lived with his Aunt Gladys and Uncle Roswell Harrington on their truck farming operation for his junior and senior high school years as his father was transferred to the Clewiston sugar plant.  He met his wife of 66 years at the Methodist Church camp in Leesburg, FL, at age 16.  He received his BS in animal husbandry at the University of Florida in 1953 where he was in the Gator Marching Band, on the livestock judging team and in the Air Force ROTC.  Bill and Marjorie (Alsmeyer) Jernigan (daughter of Lottie and Louis Alsmeyer) married in her hometown Sebring Methodist Church in February 1953.  Following graduation Bill entered the Air Force, completing some of his pilot training in Bartow, Florida.  On one training flight he successfully landed his plane with an engine fire avoiding a bailout and loss of the plane.  He transitioned into multi engines and finished his 4 year commitment stateside as a KC-97 refueling pilot.  While in the military Marge and Bill built a 15ft wooden fiberglass coated runabout ski boat along with trailer.  After his military service Marge and Bill helped her father at his small ranch on Lake Istokpoga.  Bill then served as assistant County Agent for the U of F extension office in Ocala, Florida.  In 1959 Bill began his 4 year Doctor of Veterinary Medicine studies at Auburn University in Alabama.  Marge and Bill built a pop-up camper for their Ford pickup truck and spent many summer weekends on rustic Lake Martin camping and boating with their young children Barbara and Larry while attending veterinary school.  Marge was an elementary school teacher.  When they returned to Sebring in the summer of 1963 Marge and Bill opened Sebring Animal Hospital in an old garage across from the Thrift Way at 520 North Ridgewood Drive.  Marge taught at Woodlawn Elementary during the day and helped Bill in the evenings at their animal hospital.  Bill did small and large animals into the 1970's.  He transitioned into strictly small animal practice shortly after the new Sebring Animal Hospital was completed in 1970 on highway 27.  Over the years Bill mentored upwards of 7 high school students whom themselves became veterinarians.

In 1972 Bill and Marge got a motor home which was used for family vacations.  Often it was used as transportation for the Sebring High School swim team to their swim meets.  It spent many football weekends at the University of Florida when Barbara and Larry were students.  In 1978 Bill purchased a used Greyhound Bus he converted to a motor home, again mostly used to attend UF football games (Larry hopes someday to complete the 40 plus year conversion).

Bill is well known as a very strong dedicated Christian having sung in the Chancel choir at the Methodist Church with Marge for more than 50 years.  He served in many church positions.  Bill and Marge along with George and Nancy Hensley and others worked diligently to provide the leadership to develop a very active youth ministry at the Methodist church in the 1970's.  A very solid supporter of the Boy Scouts of America, for several years he organized a Boy Scout Troop 163 Christmas tree sale.  Bill has been an active member of the Sebring Rotary Club since 1963.  For many years Bill organized the annual Rotary Spaghetti Dinner taking over from his father-in-law Louis Alsmeyer.  Bill was well known for his support of the annual Rotary Apple and Cider sale as well.  Bill was also on the Salvation Army advisory board in recent years.  He was a member of the Sebring Historical Society, a member of the Grand Guard of the University of Florida, and a lifetime member of the U of F alumni Association.  He participated for many years with son Larry and daughter Barbara in the annual UF Alumni Marching Band weekend, even when grandson Travis Baker was a marching band member.  Bill's grandfather was comptroller with the University of Florida when it moved from Lake City to Gainesville in 1906.  His father Will graduated from UF in 1918, Bill in 1953, daughter Barbara in 1979, son Larry 1982, grandsons Jarrett 2008, Travis 2011.  Bill lived long enough to see the Gators win SEC and national Football Championships and he had to no longer say "wait till next year".

Bill will be remembered as a kind generous Christian, a Veterinarian, a Rotarian, a UF gator, a son, brother, husband, father, grandfather, great grandfather and friend to many in Sebring and Highlands County.  He did not drink, smoke or gamble.  In his later years he struggled with degenerative lower back disease and COPD.  In his final days he was still able to stay at home with the loving care of his forever devoted wife Marge.  His final night he enjoyed ice cream and he still recognized his family members. He passed peacefully in his sleep early Saturday morning 7 Sept 2019.  We love him, we miss him.  We know he has a new perfect body, is not in pain and is in the arms of his Lord and Savior, Jesus Christ.

A memorial service will be held Sunday, September 22, 2019 at 3 pm. at the First United Methodist Church in Sebring with fellowship and refreshments following the service.

In lieu of flowers, donations are suggested for the First United Methodist Church in Sebring, or Rotary Club of Sebring Charities, Inc. (Band Scholarship Fund), or a charity of your choice.