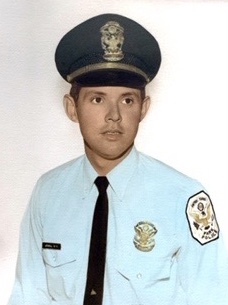 William “Bill” Ray Jewell Jr. walked into the presence of Jesus on Saturday, November 30, 2019. He was born to William and Annabelle Jewell on February 23, 1943 and was the fourth of eleven children. Bill chose to make Jesus his Savior at the age of 21 while attending church at Morningside Baptist Church in Maryland. Bill remained faithful to his commitment to the Lord all the remaining days of his life and telling people about Jesus became a centerpiece of his life.
Bill was united in marriage to Sandra Lee Goshorn on March 21, 1964 to whom two girls were born: Cynthia Leigh in 1967 and Susan Renee in 1972. Bill was a U.S. Park Policeman, Visitation Pastor, and missionary with Amazing Grace Missions. Bill enjoyed his family and church and was a friend to all. He was known for his faithfulness to God and family, his love of cars, and for being a hard worker. Bill will be dearly missed by all who knew him. He is survived by his wife of 55 years, Sandy, his daughter Cindy, husband Hutch, and their children Josh, Jonathan (Laci), Jenna (Billy), and Julia (Matthew), his daughter Susie, husband Scott, and their children Austin, Alec, Aleeya, and Ashley, as well as his three brothers Charlie, Doug, and Tony and six sisters Ann, Mary, Dee, Patty, Paula and Teresa. He was preceded in death by his father and mother and sister Martha.
Family and friends are invited to attend a memorial service on Monday, December 9, 2019 at Maranatha Baptist Church in Sebring, FL at 11:00 a.m. There will be a viewing beginning at 10:00 a.m. In lieu of flowers, remembrances can be made in Bill’s name to Amazing Grace Missions at P.O. Box 289, Dayton, TN 37321

To order memorial trees or send flowers to the family in memory of William R Jewell, Jr., please visit our flower store.
Send a Sympathy Card